Going For $2 Million With Our Grafton Apparel Family 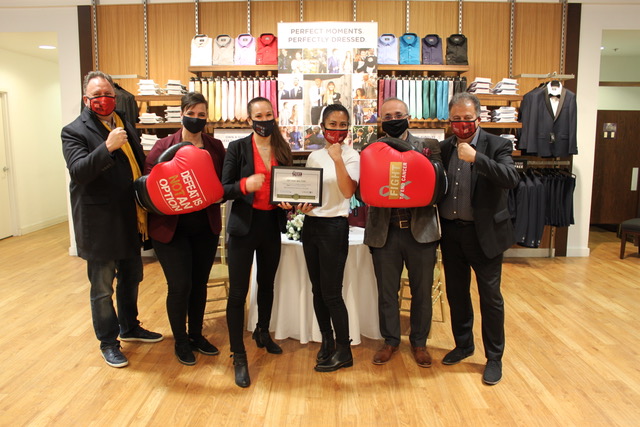 The Grafton Apparel Team raised over $255,000 with the sale of keychains and lapel pins, with all proceeds benefitting The Princess Margaret Cancer Foundation

Grafton Apparel has been a proud partner of The Fight to End Cancer since 2014 and has become a key presenting partner since 2020. Thanks to their immense support and nationwide initiatives, The Fight to End Cancer has gained nearly $650,000 in donations since 2017 and despite such a challenging year, 2021 was their BIGGEST and most SUCCESSFUL year yet, bringing in a whopping $255,000 during their in-store campaign.

We are closing in on our Fight To End Cancer goal of $2,000,000 this year through Grafton Apparel’s 2022 initiatives and campaign!

Throughout September and October, visit any Tip Top Tailors, George Richards and Mr. Big & Tall Menswear across Canada to pick up your 2022 Commemorative Fight To End Cancer Key Chain or Lapel Pin.

Grafton Apparel launched their in-store campaign to help support The Fight to End Cancer on September 15, 2022. They have already accomplished to reach $46,000 of their $300,000 goal for this year and it only gets better. With loads of new initiatives coming up, such as, who raised the most donation Pizza parties, raffles, draws, prizes and talent shows, Grafton Apparel, along with their partnering companies, are expecting another successfully wonderful year.

Grafton Apparel is working extremely hard in keeping the public engaged in their initiative. They hope to have a significant influence on changing the tide in the war against cancer through all their initiatives. The impact of cancer is very much prevalent, and they continue to fight for the community of survivors, victims and lost loved ones. Grafton Apparel CEO, Lance Itkoff, personally sent out emails to all vendors and supporters to encourage and thank them for their ongoing support!

”Many of us have been affected by cancer in some way—a friend, a family member, a colleague or a neighbour who may be struggling with cancer right now. Grafton Apparel has a rich heritage of serving Canadians for more than 100 years, and one of our greatest strengths is our incredible team of progressive, loyal and committed people. Our associates across the country have always rallied tirelessly around our fundraising efforts. Our involvement helps create a brighter future for our families, our friends and our communities. As an Official Partner, we look forward to many more years of triumphs and success stories in our continuing support of the Fight To End Cancer — a battle we can all win together.

Grafton Apparel launched their in-store campaign to help support The Fight to End Cancer on September 13, 2021, which ran till November 21, 2021. They set out with a goal of $250,000 and thanks to their incredible dedication and cooperation, the campaign brought in an exceeding $255,000 in donations, making this year the BIGGEST success yet!!!

Grafton Apparel made some executive decisions to ensure that this year was one of their best yet, including steering away from their silver theme to a more red theme in order to reflect their support in The Fight to End Cancer. They also added a key-ring/key-chain to their collection, tailoring to both men and women, which would be given as tokens of their gratitude to donations over $20.00

Each participating store excelled in their goals in the 2021 campaign, bringing in exceptional donations to go towards funding cancer research at The Princess Margaret Cancer Foundation.

Below are a few honourable mentions:

The Grafton Apparel Team is a tight-knit company that believes in supporting our noble cause and welcomes all forms of support and each and every member of the large team (consisting of nearly 1000 employees) is working hard to ensure a future free of cancer.

We could not be prouder to have Grafton Apparel in our corner as we work towards smashing barriers and reaching new heights for cancer research with Fight To End Cancer and the Princess Margaret Cancer Foundation. We are blown away by the dedication and loyalty that they have shown to the cause over the years and look forward to many more years of successful collaboration!

Are YOU Ready To Join The Fight To End Cancer?

We are always looking for more people ready to take on the fight and if you’re interested please Contact Us or Join The Fight!

Together we can end cancer once and for all!!

Defeat Is NOT An Option!

About Fight To End Cancer

The Fight To End Cancer (FTEC) is a year round initiative carried out by ambassadors, sponsors and volunteers worldwide.  Funds raised by FTEC are donated directly to the Princess Margaret Cancer Foundation.  Each year we celebrate the incredible hard work and dedication of our FTEC family with a black-tie charity boxing gala.  This gala showcases 10 men and women who represent our Official Fight Team.  More About Us or Join The Fight!