Amanda holds a photo of her mom who continues to fight the reality of cancer. [PHOTO] Virgil Barrow Photography

A special fan brought out the best of Amanda Galle in one of her most recent boxing matches.
While the Mississauga native was preparing to square off in the Fight to End Cancer, a charity amateur card last month in Toronto that benefited the Princess Margaret Cancer Foundation, she had a feeling her mother, Nicolina, would be too sick to make it.
She was re-diagnosed with breast cancer in September and had been vomiting for three days leading up to Galle’s fight.
“I said (around 6 o’clock) if it was going to do more harm than anything to her, I didn’t want her to push herself to come, but at 6:30, she was there,” said Galle, who won the fight and went on to claim the Ontario Golden Gloves female open 54-kilogram title a week later on Dec. 9.
“My dad dropped her off at the front so she didn’t have to do much walking. Looking at pictures and people conversing with her, they wouldn’t have known she was sick and throwing up for three days from the side effects from the chemo. She puts on a really good poker face and just plows forward.”
Galle says her mom’s appearance ignited a fire in her and she was grunting after nearly every punch she threw, meaning they had a lot of power behind them.
Her family has had a number of struggles with cancer over the past few years. Nicolina was first diagnosed with breast cancer in 2014 and then went into remission for almost three years before it resurfaced.
As well, Galle lost her grandfather to cancer and her grandmother is fighting anal cancer.
Boxing has been Galle’s escape from all of that.
“It’s an outlet, it releases my toxins and it allows me to endure what I’ve been enduring,” said Galle, now a five-time Golden Gloves champion.
(article continues below photos) 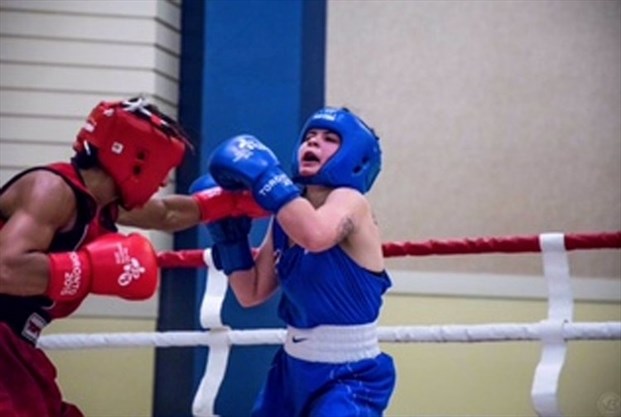 Amanda Galle (in red) won her division at the Ontario Golden Gloves championships on Dec. 2 in Toronto. She’ll move on to national in Edmonton in March. – Virgil Barrow photo 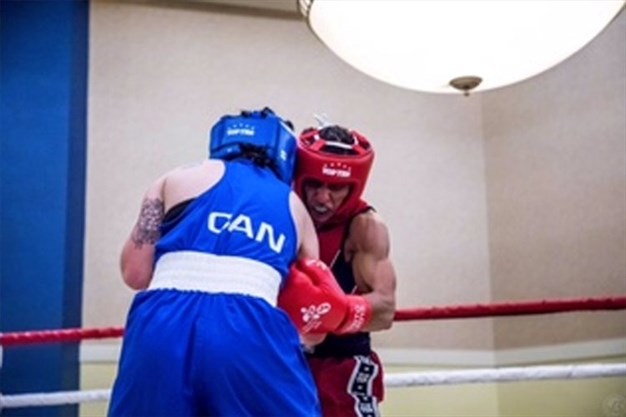 Amanda Galle (in red) won her division at the Ontario Golden Gloves championships on Dec. 2 in Toronto. She’ll move on to national in Edmonton in March. – Virgil Barrow photo

“Because this is my second time around, I definitely know to be careful not to land on my face and go through a depression. I stay strong for everyone just so I can continue to excel just like I have been the past couple of months.”
At this year’s Golden Gloves in Toronto, Galle had only one fight against former youth national champion Deneige Chaffey of Windsor, a young woman who was called up to compete in the open category so the final wouldn’t end in a walkover.
Chaffey may only be 18 while Galle is 10 years older, but Galle knew not to take her youthful opponent lightly since she remembers being in Chaffey’s shoes up against much more experienced fighters almost 10 years ago, but still winning.
“The focus doesn’t get greater just because you have a more challenging opponent, you have it within you from the get go,” Galle said.
The victory gives Galle a spot in the national championships at the end of March. The run that she’s on currently makes her believe she has what it takes to go over to Edmonton and bring back gold.
“I fought four times in the last seven weeks and I had never done that before,” she said. “I can really see the effects of it. You’re at a really high level and then you peak right in time for the fight. It’s been a constant uphill and it’s been great.”